A Tangle of Thought Threads for Your Nimble Fingers of Theory

Posted on May 9, 2019 by Bourbon Apocalypse: A Whiskey Son of Sorrow

Though semiotics, as explored by Charles Sanders Peirce and, more recently, by John Deely, will consume most of what time I still give to philosophy in terms of systematic study, the two rubber-textbook-meets-the-open-road questions that haunt me are this darling couple: 1). Why not commit suicide? and 2). How can bringing children into this world be justified?

I have fondled this dark, low-hanging (heh heh heh) teat in another post, so I will try not to reuse my suave moves too extensively. I know the traditional religious responses; however, while I will not claim that those responses do not satisfy me, I will admit that I would like to find another set of answers–if they can be found, but I am not convinced that any other foundation will provide anything more than a sandy base.

The question of suicide has interested me since grad school. To clarify, however, by “question of suicide,” I do not mean an exploration into the myriad causes behind it; rather, I mean a non-flinching look at why one should refrain. However, to the relief of my parents, I shifted my academic focus to semiotics, though not without having been first infected with the thanatos virus.

Throughout anti-natal literature,  the primary argument goes as follows: based upon both a quantitative and a qualitative scale, we can securely assume that the aggregate pain in any given individual’s life is greater than the aggregate pleasure. Thus, any life brought into existence can be guaranteed that, notwithstanding its level of subjective comfort and status, will experience a greater amount of pain–and, further to give pause,  the pain it will encounter will be greater in intensity than any offsetting pleasure it may meet. The aforementioned linked post provides non-fiction approaches, but a fictional approach to this question is the talented (and the very polite–based upon my Twitter interactions with her) Ann Sterzinger’s NVSQVAM. (Seriously, folks, support cheeky, independent authors–even if you–gasp–may not agree with their worldview. At least such authors are making you think. Speaking of thinking, check out Nine Banded Books and Feral House.) Or, if you please, I present the most engaging TV character I have ever had the pleasure of meeting, Rust Cohle:

I thought of this this recently while visiting an eighty-year-old neighbor in the hospital, a retired lawyer who still has his wits and a strong handshake. In referencing an article that he had read recently in the paper, we briefly discussed abortion. He cast off as an aside that he, personally, is against abortion because he hates to think that he may have been aborted, and he is glad that he was not, given the enjoyable life that he has lived. While I am also opposed to abortion (that damn lingering Catholic in me), though not for the same reason, I could not help but silently snap, “How would you know what you would have missed had you never been born? Besides, will whatever pleasures that you have experienced surpass, in the end, the pains?” Of course, I dare not voice such sentiments; I merely uttered a halfhearted “I agree.”

As for suicide, I am no longer truly surprised whenever I hear about someone who has committed it. In fact, the only surprise that still lingers concerns why more people do not choose to opt out of the raw deal. In my darker meditations, I foresee something like Jonestown: 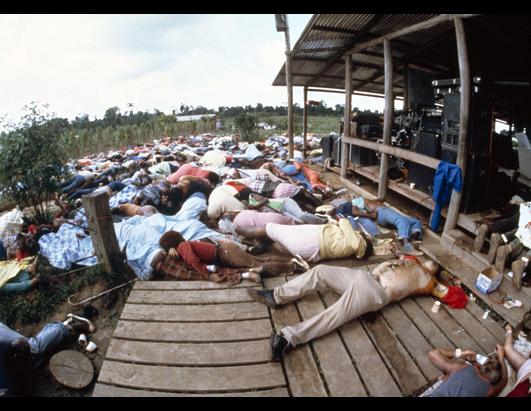 Large swaths of people drinking their way into extinction.

As the Chinese say, “Does that cat belong to anyone?” Kidding…. (That is the prejudiced half-Jap in me showing itself.) We live in interesting times–and that is not necessarily a good thing.

I have written before about Joaquin Phoenix . I will stand by my claim that he is the best actor of my generation. I think that, rather cosmically ironically, he would have been surpassed only by his deceased brother, River.

Come October, the world will witness his, my prediction, career-defining performance as the (prototypical) Joker. If you are among the handful of people who have yet to watch the trailer, you know what you must do:

Or even this one:

The teaser trailer’s close-to-fifty million views reveals something more than the obsessiveness of comic movie fanboys; this film, which–I know, another prediction–may give us the defining Joker performance, portrays a man broken down by the inherent madness of modern life. This film will tap into the zeitgeist of zaniness of our current year clown world.

Perhaps, dear reader, you are starting to worry about me. I am a-okay. How are you?