Indulgent Interview: Because I Ask Myself the Best Questions

Posted on January 18, 2011 by Bourbon Apocalypse: A Whiskey Son of Sorrow 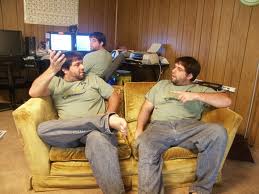 Me1: Thank you for granting me this request.
Me2: Thank you for allowing me to talk about myself.
Me1: Always a fascinating topic, if I can say so…
Me2: You most certainly can, and you’re telling me.
Me1: Yes, clever; I am…I…
Me2: Me?
Me1: Yes, you. So you tell me: Why did you choose the obscure twelve century Flemish saint St. Drogo as your patron saint?
Me2: What’s not to love about a saint who grew a tremendous tumor on his face—to the point that women and children would cry out upon seeing him? He became so hideous that he built a cell adjacent to a church and fashioned a small window through which he could receive food and the Eucharist without having to burden anybody with his ugly visage in church. I wish more parishioners would do the same—especially those who wear track pants to Mass.
Me1: Strong words. I hear that he is the patron saint of ugly people, the insane, and coffee lovers.
Me2: You’ve heard correctly—all guilty pleasures of mine.
Me1: ???
Me2: I didn’t know a person could speak in question mark-ese.
Me1: Takes dedication and symbolization. However: ???
Me2: Saint Drogo is the patron saint of outcasts, in my opinion. You know, it would be like Johnny Depp becoming a saint…but just not as winsome and good looking.
Me1: Well, your opinion usually is spot on.
Me2: And spotted, if you know what I mean.
Me1: I don’t, but that has never stopped me in the past.
Me2: Nor should it.
Me1: Speaking of the “Catholic Church”…
Me2: We weren’t.
Me1: Speaking of the “Catholic Church”…
Me2: Yes?
Me1: How can you still believe in an institution that has become nearly synonymous with corruption, hypocrisy, and manipulation? Not to mention the multitude of beliefs and practices that you are required in order to remain a card carrying member…
Me2: A church of the corrupt and of the hypocritical and of the manipulative? Hot damn—that is where I belong. Also, I like carrying cards in my wallet, especially the kind that will get you discounts at Hobby Lobby.
Me1: Okay, point taken…
Me2: Point was first freely given, for something cannot give what it does not have.
Me1: Touché.
Me2: Do you mean “touch,” as we say in God-elected America?
Me1: No, and please don’t touch me, in America or anywhere else. So, all the baggage? All the beliefs—you know, like, you know, death, heaven, hell, and final judgment? Really? Not to mention all the other stuff about birth control and purgatory and crazy saints. Really?
Me2: Shit, brother, we talk about these things while drunk, while not believe them while sober?
Me1: You’re ever sober?
Me2: You caught me. Did I mention “hypocritical”?
Me1: I am reminded of Walker Percy’s mildly perverse character Dr. Tom Moore in Love in the Ruins:

I, for example, am a Roman Catholic, albeit a bad one. I am believe in the Holy Catholic  Apostolic and Roman Church, in the God the Father, in the election of the Jews, in Jesus
Christ His Son our Lord, who founded the Church on Peter his first vicar, which will last until the end of the world. Some years ago, however, I stopped eating Christ in Communion, stopped going to mass, and have since fallen into a disorderly life. I believe in God and the whole business but I love women best, music and science next, whiskey next, God fourth, and my fellowman hardly at all. Generally I do as I please. A man, wrote John, who says he believes in God and does not keep his commandments is a liar. If John is right, then I am a liar. Nevertheless, I still believe.

Me2: Apropos—except I love whiskey much more than I’ll ever love science.
Me1: Duly noted. And you should. How much whiskey do you drink, by the way?
Me2: Shhhhhhhh.
Me1: How do you think a nation founded on abstract propositions (Ex: [A]ll men are created equal yadda, yadda, yadda…) as opposed to one expanding from an organically developed ethno-history can now maintain a functional yet multicultural unity with no higher regulating ethos than efficiency and consumer geo-capitalism?
Me2: Hell if I know.
Me1: True, knowledge does bring moral culpability, and an awareness of unconfessed culpability will lead to…
Me2: Shhhhhhhh.
Me1: I like your strategy in avoiding hard moral truths.
Me2: Such training begins at home.
Me1: Speaking of “home”…
Me2: We weren’t.
Me1: This again?
Me2: I usually have to repeat my lines twice before I learn them.
Me1: You’re reading from a script?
Me2: Well, Oscar Wilde used to prepare quips the night prior to a social engagement and then direct the conversation so as to create opportunities then to unleash what he had rehearsed the night before.
Me1: Would you sink to such a level of artifice?
Me2: No need to sink any lower than I already have. But, yes.
Me1: You strike me as a man with very strong views, especially on subjects like place and local responsibility.
Me2: Believe me, such ugly rumors are strongly overstated and overrated.
Me1: How can you say this? You started them.
Me2: Somebody had to, for crying out loud.
Me1: Cry? Do you cry much these days?
Me2: Only when I don’t have money for bourbon.
Me1: Let’s talk about place.
Me2: Let’s not.
Me1: Why not?
Me2: Why talk about a subject that will invariably lead to an examination of modern (whatever that damn term means) man’s anomie and intrinsic restlessness, his inability to commit to the joys and triumphs and failures of a particular place, and his specious belief that life will reveal itself as more authentic if he can just get in his car and leave his zip code behind in his mirror. Besides, I might start crying…
Me1: Can’t have that, for I am fresh out of pity.
Me2: Thank you.
Me1: Ever think that you are really more of an aesthete than you are a Catholic? I mean, we know how much you appreciate—if not live for—beautiful women, literature, music, art, food, and drink.
Me2: Oh, I think that all the time—usually while in the presence of beautiful women, listening to good music, talking about fine literature, and eating and drinking to my gut’s content.
Me1: Your thoughts?
Me2: I am a rotten Catholic.
Me1: What do you think about beautiful women?
Me2: Not enough of them.
Me1: Music and literature?
Me2: Makes being a human in general and a Catholic in particular tolerable.
Me1: I see. Drink?
Me2: Is the first round on you?
Me1: Yes.
Me2: Let’s.
Me1: Before we do, though, let me ask…Wait! Are you sipping from a flask?
Me2: Couldn’t wait.
Me1: Very well. Interview finished.
Me2: Sip sip.

"If you can't annoy somebody, there's little point in writing." ~ Kingsley Amis
View all posts by Bourbon Apocalypse: A Whiskey Son of Sorrow →
This entry was posted in Uncategorized and tagged bad catholic, Catholic Church, Love in the Ruins, Oscar Wilde, St. Drogo, Walker Percy. Bookmark the permalink.

3 Responses to Indulgent Interview: Because I Ask Myself the Best Questions