World Getting You Down? Go to Your Room. What Can the Hikikomori Teach Us?

Posted on January 4, 2011 by Bourbon Apocalypse: A Whiskey Son of Sorrow 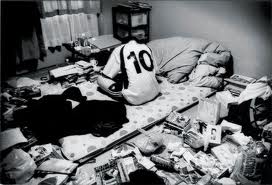 The most recent issue of Adbusters features an article by Roland Kelts that, while interesting, fascinates me more in regard to what it does not develop as opposed to what it does. In “What’s Wrong with Being the World’s No. 2?”, Kelt explores the socio-economic strain and endemic loss of optimism that Japan is currently experiencing, especially among the generations who correspond to Generations X and Y in the West. This question, which has since muscled itself into Japan’s national psyche and become the Essential Question of the Times, was prompted by the probing of Rehno, a female member of the ruling Democratic Party of Japan, in light of Japan conceding a GDP defeat to China. Not only has Japan now entered into a period of national identity discernment, according to Kelts, Japan may now function as a sign for things to come for the West.  Kelts writes, “Ironically, Japan’s adoption of American and other Western strategies for growth, beginning in the late 19th century and accelerated in the 20th, may be backfiring in the 21st – enabling Japan to show Western nationals where they’re going wrong by being at the forefront of socio-economic trauma and transformation.”  The rest of the article discusses the various ways Japan may attempt to cope, if not benefit, from this time of scrutiny.

Continuing his analysis, Kelts quotes University professor and literary critic Norihiro Kato in order to highlight one possible solution–a modified form of isolationism and Japan-Firstism. More as an aside than anything else, Kato proposes that Japan study the hikikomori for guidance.

The presence of the hikikomori is a relatively recent social phenomenon, consisting of those who have sniffed the modern world and found it odious indeed. The caricature often given is of a young man who, having trouble assuming the responsibilities of adult life, retreats into his bedroom, imposing upon his long-suffering family members to bring food to the bedroom door and to refrain from making any demands upon him that would require quitting the bedroom . While perhaps a slight caricature, this truly describes a significant number of hikikomori, from what I have read.

Sure, a social phenomenon on such a wide scale could only be possible in a post-industrial society, one in which parents need not necessarily demand that their children get out of the damn bed in order to find work to support the family. And, sure, perhaps more than a few hikikomori are simply kids who  cannot cope with the demands of Japan’s grueling educational system and exacting university entrance exams and think this to be a convenient and outrageous way to dodge the system. However,…

Anomie is, after all, the spirit of modernity.  The hikikomori are labeled (derisively) as those who suffer from avoidant personality disorder, thus implying that it is indeed a disorder to want to avoid others. Perhaps, though, the hikikomori act as a gauge for the spiritual sickness of the times. Perhaps, most people need to be avoided if one cares to maintain any sort of authenticity.

This is a far cry from the ancient Greek notion of polis and the accompanying belief that one could manifest one’s fullness only in the public arena. Given the relative uniformity of Greek culture, such a belief once possessed a force that it no longer does, given that there now exists no semblance of a uniform society in modern life. The tentatively unifying tradition of the West (and Westernized countries) is consumer capitalism, definitely not Christianity, tribalism, or place. In lieu of truly unifying traditions and beliefs, the sanest move of all may be simply to adjure society. While I cannot recommend that people suddenly study J.-K. Huysmans’s A rebours for guidance (a certain Oscar Wilde did such, much to his detriment), I think that Jean Des Esseinttes does act as a most sympathetic contrarian aesthete, struggling to maintain an authenticity–as decadent as it might have been–against these stupid and crass times.

Get thee to a decadent oratory? Given the current lack of trust in the institutional authority of the Catholic Church, I doubt that we will see a sudden rise in religious life anytime soon. Instead, I believe that we will see a greater movement towards intentional communities that will include both religiously-minded and the not so religiously-minded, who reinvigorate (and not recycle, I hope) certain traditions the best they still can. Still, I suppose that it is a great time to be a Carthusian.

"If you can't annoy somebody, there's little point in writing." ~ Kingsley Amis
View all posts by Bourbon Apocalypse: A Whiskey Son of Sorrow →
This entry was posted in Uncategorized and tagged Adbusters, Business and Economy, Carthusian, Catholic Church, Hikikomori, J.-K. Huysmans, Japan. Bookmark the permalink.

2 Responses to World Getting You Down? Go to Your Room. What Can the Hikikomori Teach Us?