Posted on October 28, 2010 by Bourbon Apocalypse: A Whiskey Son of Sorrow 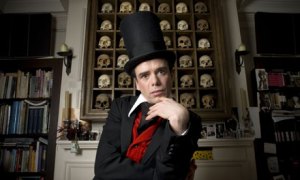 “Let us pay with our bodies for our soul’s desire.” Theodore Roosevelt

As with the sordid-beyond-words/odors person of diarhetic shock punk rocker GG Allin, Sebastian Horsley was another mess of flesh and bone and soul, poetry, blasphemy, drug abuse, and infinite longing with whom we should become acquainted, if for no other reason, in order to remind ourselves that the human condition cannot be neatly explained in behaviorist terms of environment and material cause and effect or the parallel simplistic spiritual categories. In other words, let us gape at the abyss that resides within each one us.

Sebastian incarnated vintage British odd. While in America we tend to over-medicate and lock away the emotionally and mentally lopsided as a public embarrassment (or at least shuffle them away to the nearest public library), in Britain a peculiar paternal pride is taken in the off-beat, as they have bestowed upon the much more benign appellation of “eccentric,” as opposed to “sick.” (Think Evelyn Waugh.) One such eccentric was the self-proclaimed and self-styled (I suppose the two oft go together) gutter-dandy Sebastian Horsley. As an art school drop-out, this painter made himself a household name by writing a regular sex column for a popular London paper, but he found his column axed when he decided to ruminate on sodomy one Easter morning. Apparently, even tolerant Anglican England has its bonny limits.

Such a turn of events was nothing new for Sebastian. He once made millions on the stock market through deft financial manoeuvring (tipping my hat toward the British spelling), only to lose most of it to the machinations of various pharmaceutical companies, namely Heroin and Cocaine LTD. Let us not be too harsh, though; he probably needed the drugs in order to maintain his stamina for the 1000 prostitutes whom he engaged over the course of his lifetime. Prostitution is one of the world’s oldest professions, and it was also Sebastian’s. For a spell he was a male prostitute, and, while under the spell, he was buggered by one of Britain’s mass murders. Did he believe that prostitution should be made legal? No, because, as he maintained, that would take away the allure.

In 2000, Sebastian traveled to the Philippines to be crucified in a gruesome re-enactment that takes place every year during Holy Week. In the process that leads to this annual replay of Calvary, flagellants whip themselves bloody while vendors sell souvenir whips and, of course, Coca-Cola. Three inch nails are pre-soaked in a disinfectant solution to prevent infection and, once crucified, the victims are allowed to hang for only ten to fifteen minutes. Those who volunteer to undergo crucifixion are usually Filipino men who do so with the hope that God will heal a loved one who is ill or to mortify of the flesh or to plead with God not to send floods. (An aside on the topic of the mortification of the flesh: if we still believe that there is an immortal aspect to our being, then does it not make sense to devote one’s energies to developing this aspect even if it might require short-term suffering? Let us look at it from another angle. We are willing to subject ourselves [though, I certainly am not] to all types of silly practices, namely, exercise or secular fasts, that is, diets. For what? A healthier life? Maybe, but a healthy life is still rather insignificant compared to eternity. Yet, we usually admire those who are sufficiently disciplined to exercise on a regular basis with an emphasis on the temporal while, on the other hand, we recoil in horror at the thought or image of a self-flagellant who has his eyes on the everlasting. As for me, my sympathies go toward the yogi aesthetic or self-flagellant, not to the Adkin’s dieter or chronic health club member.) Back to Sebastian…In quite a twist, he denied himself painkillers. After being hoisted on the cross, his footrest broke away, and he fell off the cross. Had his wrist straps not snapped, the nails would have ripped through his hands—not good business for a painter. Sebastian saw this as a sign of wrath from the God he did not believe exists. I see this as a sign that God has a particularly cheeky sense of humor.

Horsley died on June 17th of this year because of an overdose on heroin and cocaine. He claimed to have slept with a pistol next to his bed with the muffled hope that if the telephone ever rang while he as was asleep, he might accidentally pick up the gun and shoot himself instead. He wrote in his autobiography that he had “decided to stop living because of the cost.” Perhaps he decided to make good on that claim.

For all the self-posturing, decadence, and theatrics—no, because of it all—Sebastian seemed to have had an gnawing awareness of the futility of a life not grounded in the infinite. He rejected the inane phoniness of those who act as if the existence of God is a mere trifle of an issue. Sebastian seemed to understand the stakes. His own hidden despair was a testament to it. Yet, as Horsley himself once said, those who are mired in nihilism are closest to faith.

"If you can't annoy somebody, there's little point in writing." ~ Kingsley Amis
View all posts by Bourbon Apocalypse: A Whiskey Son of Sorrow →
This entry was posted in Uncategorized and tagged Crucifixion, God, mortification, nihilism, Sebastian Horsley. Bookmark the permalink.